Feedback wanted on new Online Maps of the Irish Uplands.

via Feedback wanted on new Online Maps of the Irish Uplands.

Land Use and Land Mobility is a complementary driver of future productivity growth in Irish Agriculture. . At this workshop a report prepared by Teagasc on Agronomic, Economic and Policy Drivers of land Use Change will be launched. An outline of the programme is as follows:

In order to confirm your…

Researchers from IT Sligo and NUI Galway (including two members of the IDEAL-HNV team) have just published a paper in Ecological Indicators on Development of a nature value index for pastoral farmland-A rapid farm-level assessment. The paper proposes combining three simple measures, proportion of improved agricultural grassland, stocking density per hectare of Utilisable Agricultural Area (UAA) and length of linear habitats (field boundaries) to give a value on a ten point scale that indicates the nature value of the farm. The methods used could be applied to other systems in other European countries.

The index was developed based on farms in counties Mayo, Sligo and Leitrim and tested on farms in east Galway. The index could be incorporated into farm sustainability indices as the nature value component, or adapted for labels such as Origin Green. It could also be applied to identify High Nature Value farmland as farms with high nature value index scores are most likely HNV farms. Click here or contact Pamela Boyle, James Moran or Caroline Sullivan for further details.

Cattle grazing by the shore in Co Sligo

The IDEAL-HNV project hosted a stakeholders meeting on April 9th in IT Sligo. The event was held in parallel to the Environ 2015 meeting. Some preliminary results on HNV typologies were presented (based on the 2013/2014 fieldwork). A number of stakeholders were in attendance including representatives from the Irish Farmers Association (IFA), National Parks and Wildlife Service (NPWS), Department of Agriculture, Mountaineering Ireland, farmers, local community groups and organisations with HNV farming interests.

Participants raised issues such as CAP funding limitations, the need to get other agencies involved in discussions, the possible policy implications of the results of the project and the need for dissemination of the results to the wider public. We have taken all the views on board and aim to incorporate them into future analyses, report writing and information dissemination sessions.

Discussion during the stakeholders meeting

We are busy with data entry and analyses. All of the 102 farm habitat surveys and farm questionnaires have now been digitised. There are a number of other tasks remaining including calculating field boundary lengths (another digitising task), stocking densities and lots of other farm-level variable calculations that we need to complete before we can begin describing the types of HNV farms in Ireland.

Some preliminary results were presented at a meeting of the British Ecological Society in Lille, France in December. The initial analyses (with 64 farms) were interesting  (click here for poster) and we are looking forward to seeing what the full analyses will tell us.

SPOT 7 satellite data of 1.5m spatial resolution is now available and will be used to classify HNV farmlands in the Comeragh Mountains, Co Waterford. Broad methodology on image segmentation and classification has been developed and applied to sample data. This will be used to  to develop a final methodology for farm-scale HNV maps.

We analysed the distribution of HNV farmlands in the Irish uplands using a coarse resolution HNV map and digital elevation model data. Outputs of the work will be presented at the Agricultural Research Forum 2015 in Tullamore, Offaly early next week.

There are a number of events in April that may be of interest so I thought I’d post about them all here. The IDEAL-HNV team will be presenting results at all of these.

Environ will be on from April 8th-11th in IT Sligo. The deadline for abstract submission is Feb 18th

For further information and to register etc. see http://www.esaiweb.org/environ/

Uplands Workshop 2015 – Research for a Sustainable Future is organised jointly by the Irish Uplands Forum and the Trinity Centre for Biodiversity Research, and is to be held at TCD, April 15th. The deadlines for abstract submission is Feb 15th

For further information see this flyer or http://www.irishuplandsforum.org

Hope to see ye at some of these 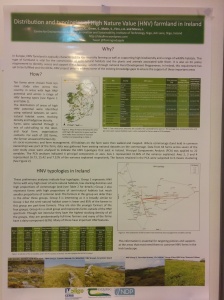 Poster on preliminary data analysis on 64 farms in the IDEAL-HNV project on display at the BES AGM in Lille, France

The Institute of Technology Sligo wish to appoint an Ecologist (Grade = Post Doctoral Researcher) for the Results Based Agri-environment Pilot Scheme (RBAPS) project in Ireland and Navarra. This is a specified purpose contract position to the 30th of June 2018 with a starting salary of €35,743-€49,487. The project partnership consists of EFNCP, IT Sligo, BirdWatch Ireland, the National Parks and Wildlife Service and High Nature Value Services Ltd. in Ireland and Gestión Ambiental de Navarra and EFNCP in Spain. The post is part funded by the European Commission (DG Environment)

Job specifications/application forms may be accessed and applicants may apply online for the above position on our website at: http://itsligo.ie/vacancies. Closing date for receipt of applications is Friday the 23rd of January 2015 at 12:00 noon.

The Institute of Technology, Sligo is an equal opportunities employer.

Job Vacancy: RBAPS Project Manager
The European Forum for Nature Conservation and Pastoralism (EFNCP) wish to appoint a Project Manager for the Results Based Agri-environment Pilot Scheme (RBAPS) project in Ireland and Navarra. Post is for maximum of 3.5 years with starting salary of €38,664. The project partnership consists of EFNCP, IT Sligo, BirdWatch Ireland, the National Parks and Wildlife Service and High Nature Value Services Ltd. in Ireland and Gestión Ambiental de Navarra and EFNCP in Spain. For full details and how to apply see http://www.efncp.org/download/EFNCP_RBAPS_Project_Manager_Spec.pdf. Closing date for applications is the 9th of January 2015

Pre-Call announcement: Ecologist RBAPS Project Ireland
This is a pre-call announcement. In January 2015 IT Sligo will be looking to fill a contract research post in the area of Ecology for the Results Based Agri-environment Pilot Scheme (RBAPS) project. The post will be for a maximum of 3.5 years and will be based in Sligo. The post will form part of larger study (RBAPS) undertaken by EFNCP, IT Sligo, BirdWatch Ireland, the National Parks and Wildlife Service and High Nature Value Services Ltd. in Ireland and Gestión Ambiental de Navarra and EFNCP in Spain (funded by DG Environment of EU Commission).
The specific objectives of the pilot projects, as set out by the European Commission, are:
-To promote the design, development and use in rural areas of result-based remuneration schemes to conserve and enhance biodiversity;
-To increase the understanding of factors that contribute to the success or failure of such schemes;
-To identify opportunities and conditions for increasing the use of such schemes in the EU and in particular in the context of the CAP;
-To explore the potential for such schemes to be applied widely in the rural countryside and beyond grasslands, e.g. for the protection and enhancement of pollinators and soil biodiversity;
-To demonstrate the potential of these schemes to achieve the ecological results they are designed for by developing, testing and applying widely appropriate monitoring to verify the ecological results achieved;
-To promote and increase awareness and better understanding of the benefits of results based remuneration schemes particularly within the rural community.

A formal advertisement will be posted early in the new year.
In the meantime please alert colleagues of this opportunity.

On the 24th of October, as part of the Burren Winterage Festival, many of the IDEAL-HNV project members took part in, helped organise and attended the Burren Winterage School.
The day started off with an opening address from James Moran. The text of that address is available here.

This was followed by “Stories from the Land”. Six scientists/rural development specialists and seven farmers from some of Ireland’s most well known landscapes presented case studies from their areas and explored a vision for a sustainable future for these areas.

Each talk gave an insight into that case study area but each was also very different with a variety of topics touched upon. The importance of the areas from a biodiversity point of view was easily established but the issues faced by farmers in these HNV areas were different.The socio-economic reality of some of these areas was very well summed up by John McGillaway, Lorcan O’ Toole and Martin Collins. The impacts of changing management practices on the Burren and the Shannon Callows were also highlighted as well as the successes (and otherwise) achieved through working with the scientific community. There were some great stories, and innovative suggestions (particularly in relation to rushes) from the farmers. 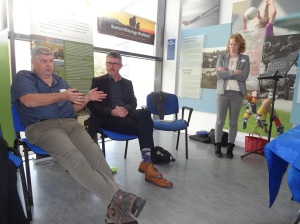 Closing remarks were made by Joe Mannion (ex UCD School of Agriculture) & Michael Berkery (Chairman of FBD). Food markets, the globalisation of food production, land sharing and land sparing and current national and international policies were all raised here.
The event was a great success and it was enriched by the active and open participation of farmers from these HNV areas. However it is not enough to simply talk about supporting these areas. We hope to build bigger and bigger networks and work with the government and other agencies to ensure action.

Fieldwork for the 2014 field season for the IDEAL-HNV project commenced on April 14th of this year. Data gathered in 2014 will be combined with the data from the Leitrim pilot giving us case study information from ten sites across the country.

Farmers in each area participated in the research, answering some management questions and allowing the habitats on their farms to be mapped. The sites selected all had high HNV potential but the participating farms were randomly selected.

Ten farms were surveyed at each of the following sites:

The last farm was surveyed on September 24th. It was a wonderful summer for fieldwork. I could count the number of days I got soaked to the skin on just one hand. This certainly contributed to the success of the field season. Thanks to my field assistants on four of my field days; Chloe Sullivan, Shafique Matin and Louise Duignan and a special thank you to each of the farmers who gave me their time and allowed me to walk on their land.

The next step is digitising all the field data and analysing the information from our 102 farms.

In the meantime I’ll leave you with a selection of photos from the summer. 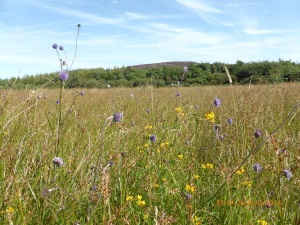 HNV landscape in West Cork in May

One of the few wet days 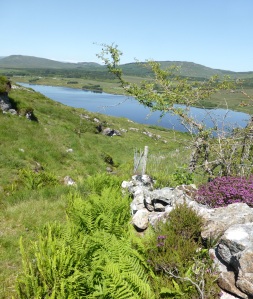